Chelsea cemented their grip on fourth place in the Premier League as Kai Havertz struck twice to seal a 2-0 win over struggling Fulham on Saturday.

Thomas Tuchel’s side warmed up for Wednesday’s Champions League semi-final second leg against Real Madrid with a ruthless display at Stamford Bridge.

Havertz netted in each half to lift Chelsea six points clear of fifth-placed West Ham in the race to qualify for next season’s Champions League via a top-four finish.

West Ham have a game in hand at Burnley on Monday, but Chelsea are looking up not down after they closed the gap on third-placed Leicester to just two points with four games left.

“We were spot on. It was what we demanded from ourselves. We showed the pride we are capable of, to do it in between two big games,” Tuchel said.

“We knew Fulham gives everyone a hard time. I’m beyond happy. There was no lack of concentration.”

Havertz’s seventh and eighth goals of an underwhelming first season at Chelsea were a welcome sign the German playmaker is finally emerging from his funk.

Since arriving from Bayer Leverkusen, Havertz has endured a bout of coronavirus and a host of diffident performances that raised doubts about his desire.

But the 21-year-old thrived in the false nine role against Fulham in an indication he could still have a part to play in Chelsea’s bid for a memorable end to the season.

“For sure, this is what we want if someone gets his chance. He scored two decisive goals and he was involved along with Timo Werner,” Tuchel said.

Just as significant as Havertz’s improvement, Chelsea remained rock solid at the back and have kept 17 clean sheets in 23 games under Tuchel.

The German coach’s only worry was the sight of the influential Mason Mount being treated for a back injury which he played through before being taken off in the closing stages.

“I hope really that Mason is not a big thing and hopefully he can fully recover for Real Madrid,” Tuchel said.

Chelsea have been revitalised by Tuchel since he replaced the sacked Frank Lampard in January.

The former Paris Saint-Germain boss arrived with Chelsea languishing in ninth place, but he has led them back into the top four and earned an FA Cup final date with Leicester in May.

The icing on the cake for Tuchel would be reaching the Champions League final, with Chelsea hosting Real on Wednesday as they look to capitalise on the 1-1 first-leg draw in Madrid.

Third-bottom Fulham sit nine points from safety with four games remaining and look set for relegation to the Championship.

It was 42 years since Fulham last won at Stamford Bridge, but they almost snatched a shock lead when Antonee Robinson’s 20-yard rocket was tipped over by Edouard Mendy.

Chelsea responded to that threat with a superbly crafted opener in the 10th minute.

Thiago Silva’s long pass was beautifully controlled by Mount and the midfielder slipped a pin-point ball through to Havertz, who slotted a composed finish into the far corner.

Fulham weren’t out of the hunt and Ademola Lookman’s low drive was pushed away at full stretch by Mendy.

But Havertz was beginning to hit his stride at last and he doubled Chelsea’s lead in the 49th minute.

Ben Chilwell’s long pass picked out Havertz and he glided away from two defenders to find Werner.

Werner played a deft pass through to Havertz and he capped the flowing move with a clinical finish.

For all his critics in an uneven season, the much-maligned Werner is the first player to register double figures for both goals and assists in his debut season for Chelsea since Eden Hazard in 2012-13. 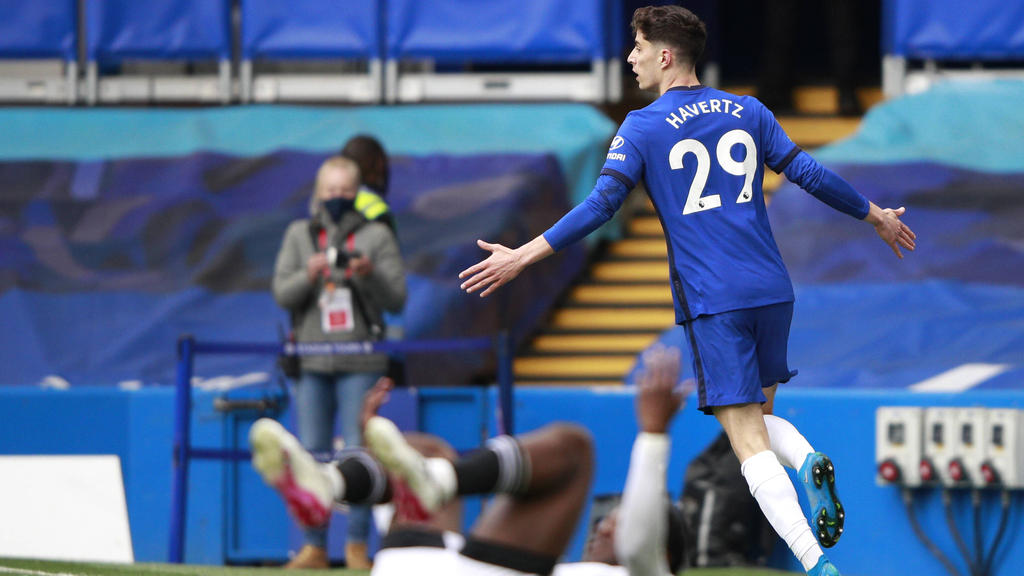